The improvement project consists of the installation of new irrigation and landscaping, including planting 363 trees along the bike and pedestrian trail. Made possible by a grant from the California Department of Forestry and Fire Protection (CAL FIRE), the project is part of the City’s 40-year Urban Forest Management Plan (UFMP) that will act as a guide for growing and maintaining an urban forest in Garden Grove.

In keeping with the City’s Re:Imagine Garden Grove efforts and expanding on the Active Streets Master Plan, the trail enhancements further the City’s goal to create healthier and more connected open spaces.

In 2014, the bike and pedestrian trail was first introduced at the inaugural “Re:Imagine Garden Grove-Open Streets” event. The ¼-mile trail, located on the Orange County Transportation Authority (OCTA) Pacific Electric Right-of-Way, gave event attendees the opportunity to bike, walk, or skate from Nelson Street to Stanford Avenue uninterrupted by traffic.

In 2016, the California Department of Transportation (Caltrans) awarded an Active Transportation Program grant to the City to extend the trail to Brookhurst Street, creating an approximate 1-mile bike- and pedestrian-friendly trail.

The trail will fully reopen after the last segment is complete, on Tuesday, December 1, 2020, with an official unveiling tentatively scheduled for January 2021.

For more information about the UFMP and to view the project map, visit ggcity.org/urban-forest or call (714) 741-5135. 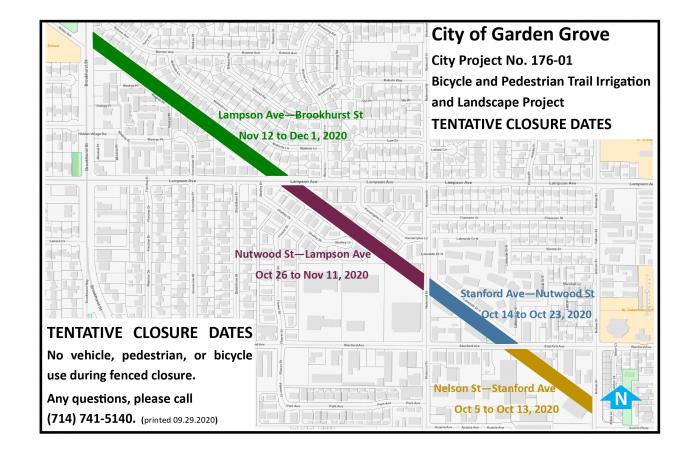