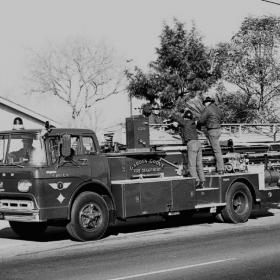 The Garden Grove Fire Department was formed as the Garden Grove Fire Protection District in October 1926 as a result of several devastating fires that resulted in $8,000 lost in the early 1920’s. The department began with 25 volunteer fire fighters, and the first fire chief was E.J. “Toby” Tobias who was appointed in early 1927; a position which he held for 25 years. An electric siren activated from the local telephone station and mounted on the city water tower behind the depot sounded the alarms. The first engine that the department took possession of was an American La France with a 400 gallon capacity.

The year 1956 was an eventful one, as it marked the town of Garden Grove's official incorporation as the "City of Garden Grove." The Garden Grove County Fire Protection District No. 1 took over fire protection duties for all city areas not previously included in the district's boundaries. A Fire Prevention Bureau was created and Captain S. Beitler was chosen to head it as the first fire marshal. On January 1, 1958, however, the City of Garden Grove took over the reins of the Fire Protection District and the "Garden Grove Fire Department" was officially born. The new city proudly approved the appointment of Chief Umphress and 18 fire fighters into the "classified service" of its fire department. 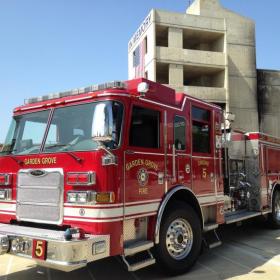 The year 1974 was a very significant one, not only for the Garden Grove Fire Department, but also for the city's residents as well. In that year, citizens overwhelmingly approved a small tax increase to provide the necessary base funds for initiating fire paramedic services in Garden Grove. By the end of 1974, eight veteran fire fighters had entered paramedic training at Orange County Medical Center (now U.C.I. Medical Center). 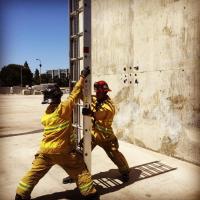 The year 1980 saw the Garden Grove Fire Department operating seven fire stations geographically situated throughout the city serving 120,000 residents. In 1996, the fire chiefs of Anaheim, Fullerton, Garden Grove, and Orange met with the fire chiefs of Fountain Valley, Huntington Beach and Newport Beach. They agreed that there would be cost savings benefits in combining the communications operations of the Central and North Net Fire Communications Center. Through negotiations, the Metro Net Fire Communications Center was formed using a Computer-Aided Dispatch (CAD) System.

In 2016, the Garden Grove Fire Department celebrated its 90th Anniversary, issuing a commemorative 90th Anniversary badge to its sworn personnel, and two years later, in 2018, celebrated the opening of a new, modern Fire Station No. 6, replacing a 50-year-old station.

With the critical need to continue providing higher levels of service to a constantly growing community, on August 16, 2019, the Orange County Fire Authority took over fire protection services for the City of Garden Grove. For 93 years, the Garden Grove Fire Department heeded the call for service with tried and true experience, professionalism, and commitment. While 2019 begins a new chapter in Garden Grove's fire protection history, the Garden Grove Fire Department will forever hold a cherished place in the heart of the community for generations to come.