“Talk about a ‘wow!’ moment, Garden Grove is over-the-top thrilled, excited, and overjoyed to see SteelCraft add its one-of-a-kind vibe to our re-imagined downtown! The tremendous anticipation of their grand opening has been phenomenal, and goes beyond everyone’s expectations of what the largest, and first SteelCraft in Orange County brings to Garden Grove,” shared Honorable Mayor Steve Jones.

During the Ribbon Cutting Ceremony Gros said, “We set out to create a sense of community in a shared space. The tables are long, so you can sit next to someone you don’t know, over food and drink that is bar none, in the hopes that you will leave as friends.”

“Two years ago, this was an empty lot. Already, we can feel we have created a community within a community: artisans, in a shared space, serving the most thoughtful, creative food, beer, coffee, and dessert,” she shared.

Gros celebrated the vendor lineup, thanking each owner, chef, and team for exemplifying the SteelCraft core values of craft, community, and restoration.

Martin Howard, Gros’s partner and President/CEO of SteelCraft builder-developer Howard CDM, shared his enthusiasm for the vision coming to life.

“Everywhere you look, every detail is beautifully executed,” said Howard. “The scope for SteelCraft Garden Grove called for multiple canalevered containers and a second story balcony. We introduced an arcade container, built ten custom businesses for each food and drink perveyor, and added private event and office space. Thanks to our talented and thoughtful team, their collective efforts on this challenging project have paid off ten-fold.”

He also thanked the architectural teams from Studio One Eleven for their landscaping, including drought-tolerant greenery and citrus trees, and the color palette, introducing a new vibrant sunshine yellow among the greys, red, and white.

Lisa Kim, Garden Grove Assistant City Manager and Community and Economic Development Director said, “Working with CEO and President Martin Howard’s creative and proven team from Howard CDM, and sharing the dynamic vision of SteelCraft founder Kim Gros has been an experience like no other. SteelCraft Garden Grove is an amazing project, built by amazing people, that overwhelms you with feelings that celebrate Garden Grove’s heritage and embrace family and community.”

Howard’s own scripted handwriting reads the word love in LED-lighting above the walkway adjoining Cauldron Ice Cream and the soon-to-be Wilson Creek Winery. A strawberry mural, a tribute to the City’s famous Annual Strawberry Festival, adorns reclaimed barn wood doors that open to a vintage video arcade inside a 40 foot shipping container.

Garden Grove City Manager Scott Stiles said, “From the beginning, the City knew this was going to be a very special place for everyone, and we were not disappointed. Thanks to the efforts of so many, the opening of SteelCraft Garden Grove highlights a huge accomplishment in turning Garden Grove from a place that only lived in our imagination, to what is now our reality.” 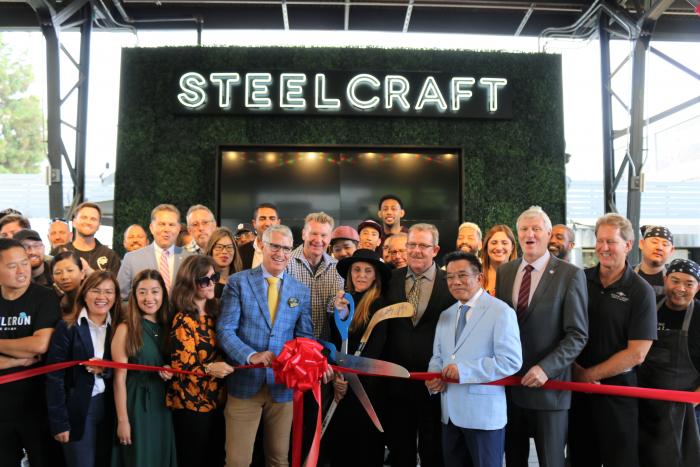