The Garden Grove Police Department’s Traffic Unit will be conducting a DUI/Driver’s License Checkpoint this Saturday, September 21, between the hours of 9:00 p.m. and 3:00 a.m. Checkpoints are placed at locations based on collision statistics and frequency of DUI arrests. Locations are chosen with safety considerations for the officers and the public.

The deterrent effect of high-visibility enforcement using both DUI checkpoints and DUI saturation patrols have proven to lower the number of persons killed and injured in alcohol or drug impaired crashes. Research shows that crashes involving an impaired driver can be reduced by up to 20 percent when well-publicized and proactive DUI operations are conducted routinely.

In California, alcohol involved collisions led to 1,155 deaths and nearly 24,000 serious injuries in 2014. Over the course of four years, Garden Grove Police Department officers have investigated over 650 DUI collisions, which claimed 15 lives and resulted in over 300 traffic related injuries.

DUI and driver’s license checkpoint studies of California drivers have shown that 30 percent of drivers in fatal crashes had one or more drugs in their systems. A study of active drivers showed more tested positive for drugs that may impair driving (14 percent) than did for alcohol (7.3 percent). Of the drugs, marijuana was most prevalent at 7.4 percent.

The Garden Grove Police Department would like to remind the public to be mindful when taking prescription medication, even small amounts of alcohol can greatly intensify the impairment.

Drivers are encouraged to download the Designated Driver VIP (DDVIP) free app for Android and iPhone. The DDVIP app locates nearby bars and restaurants that feature free incentives for the designated sober driver, from free non-alcoholic drinks to free appetizers, and more. The app has the capability to tie-in social media accounts and contact Uber, Lyft, or Curb.

Drivers caught driving under the influence can expect the impact of a DUI arrest, jail time, fines, fees, DUI classes, license suspensions, and other expenses that can exceed $10,000.

The checkpoint will be conducted in coordination with the City of Garden Grove’s Accident Reduction Team (ART), with funding being provided by the California Office of Traffic Safety, through the National Highway Traffic Safety Administration, reminding everyone to “Report Drunk Drivers - Call 9-1-1.” 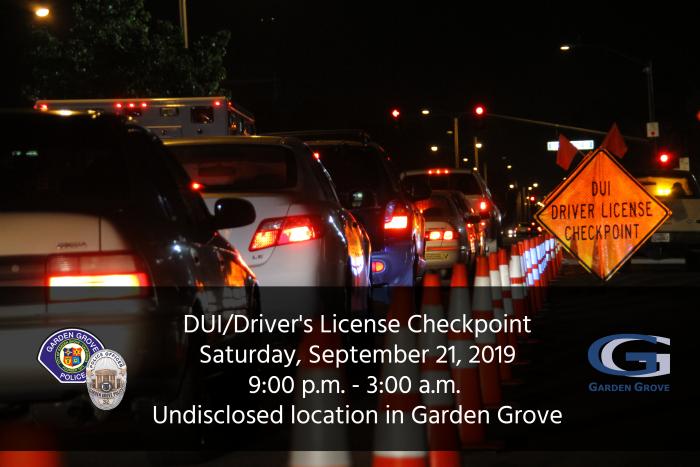