Summer Mobilization - Drive Sober or Get Pulled Over

This Labor Day, and Every Day: Drive Sober or Get Pulled Over

As we enter the final stretch of summer spending time at the pool or barbecuing with friends and family, the Garden Grove Police Department is driving home the importance of celebrating responsibly by not driving, or riding a motorcycle, impaired.

From now through Monday, September 3, 2018, the Garden Grove Police Department is participating in a high-visibility national enforcement campaign: Drive Sober or Get Pulled Over. During this period, Police and Sheriff’s Departments statewide, along with the California Highway Patrol, will increase the number of officers on the road to stop suspected drunk or drug impaired drivers and motorcyclists. If you are caught driving or riding impaired, you will be pulled over and arrested.

The Garden Grove Police Department will have a special emphasis during this 18-day mobilization to enforce all traffic violations by deploying extra DUI Saturation Patrols and a DUI/CDL checkpoint on Saturday, August 25, 2018, from 9:00 p.m. to 3:00 a.m.

The enforcement campaign runs through the Labor Day holiday weekend, which is one of the deadliest times of the year for alcohol-involved traffic deaths. Sadly, one-third of all traffic deaths involve drunk drivers. According to the National Highway Traffic Safety Administration (NHTSA), 10,497 people were killed in alcohol-involved crashes, or one person every 50 minutes.

“It’s up to drivers to make the smart decision and drive sober not just for this enforcement period, but every day”, says Police Chief Todd Elgin. “This isn’t about ticketing. This is a campaign to get the message out that driving impaired is illegal and takes lives.”

The Garden Grove Police Department will show zero tolerance for impaired driving or riding and joins efforts by the California Office of Traffic Safety (OTS) to educate drivers that “DUI Doesn’t Just Mean Booze.” If you take prescription drugs, particularly those with a driving or operating machinery warning label, you may be impaired enough to get a DUI. Marijuana can also be impairing and result in a DUI, especially in combination with alcohol or other drugs.

From 2005 to 2015, the percentage of drivers in fatal crashes with an impairing drug other than alcohol in their system has risen from 26.2 percent to 42.6 percent. As far back as 2012, a roadside survey in California showed more drivers tested positive for drugs that may impair driving (14 percent) than did for alcohol (7.3 percent).

During this national enforcement campaign, there will also be increased state and national messages about the dangers of riding impaired, which combined with enforcement, aims to drastically reduce drunk or drug impaired riding on our nation’s roadways.

Motorcycles require specific training and skill. When a rider adds alcohol, marijuana or impairing prescription medication to the mix, it is not only illegal, but increases the risky nature of riding a motorcycle.

To avoid a DUI and putting others, and yourself, at risk, the Garden Grove Police Department has a few tips to stay safe on the roads:

Funding for this DUI operation is provided to the Garden Grove Police Department by a grant from the California Office of Traffic Safety, through the National Highway Traffic Safety Administration. 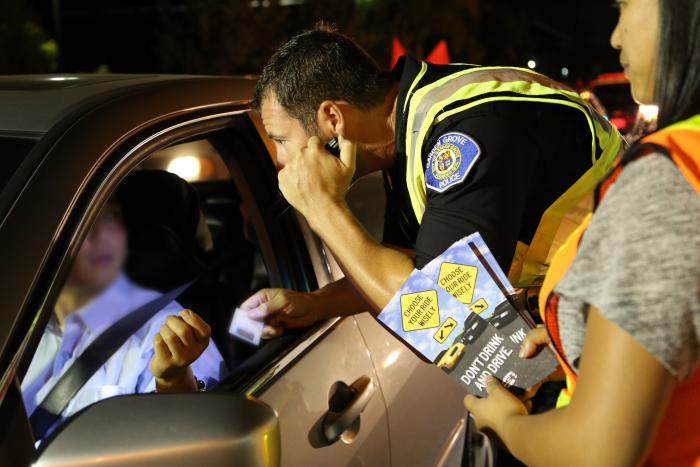