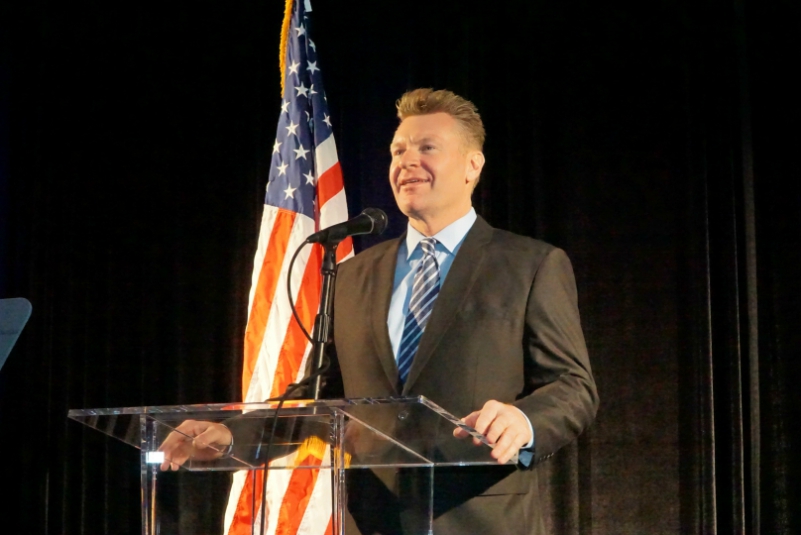 Speaking before a sell-out crowd of over 500 attendees, Garden Grove Mayor Steve Jones presented his first State of the City speech, today, at the Great Wolf Lodge Southern California.

The Mayor opened his speech by talking about his early years in the city, his nearly 20-year commitment to public service, and the anxious joy of becoming mayor.

“Needless to say, the thrill of finally becoming the elected mayor, and having this opportunity to deliver my first State of the City address is…ridiculously overshadowed by the stress of wanting it to be just perfect!”

“We’re going to choose our own way and not attempt to mimic what any other cities are doing. Among our most sacred core values are: we are authentic; we are compassionate; we are welcoming; and we are planning to keep things very, very real in The GG.”

High on the Mayor’s list of ways the city is re-imagining itself is the idea of placemaking, a process or philosophy by which public spaces promote personal health, happiness, and well-being. He points to two placemaking pioneers who are bringing the concept to Garden Grove: Aaron Paley, co-founder and former executive producer of CicLAvia; and Shaheen Sadeghi, developer of The LAB and The Camp in Costa Mesa, and The Packing House in Anaheim, whom he refers to as the “Curator of Cool.”

The City’s transition to district elections last year was illustrated by a video featuring the Mayor and City Council, describing themselves and their visions for their respective districts.

Moving to economic development and projects in Garden Grove, Mayor Jones presented an extensive list of new businesses to join the city, including a number of new eateries at The Promenade. Upcoming additions to Garden Grove include UFC Gym, Gold’s Gym, and Aldi’s market.

From premier housing developments like the mixed-use Brookhurst Place, to the repurposing of craftsman homes in the Civic Center by Shaheen Sadeghi called “Cottage Industries,” Mayor Jones refers to these as some of the “coolest” projects to come to the city.

For the first time in the city’s history, Transient Occupancy Tax exceeded sales tax as the city’s largest single revenue source, thanks in large part to the overwhelming success of Great Wolf Lodge Southern California.

Other hotel projects on the horizon include a new Home2/Hilton Hotel; expansion of the Hyatt Hotel on Harbor Boulevard; and a new full-service Nickelodeon-themed water park hotel.

Construction of a $450M project, located on Harbor Boulevard, south of Target, consisting of three hotels with 769 rooms is what the Mayor referred to as, “The single largest, and hands-down most exciting development project Garden Grove has ever seen.”

Introduction of the City’s new image campaign, "Garden Grove is Your Market" was accompanied by a video produced by the City’s GGTV3 cable team, who produced all of the State of the City videos.
The program ended with the Mayor’s call to action for the community and leaders to work together for the betterment of the city.
“Garden Grove is in a unique position to accomplish great things in the years to come. Embrace that! Be part of it! And we will all share in the rewards of our collaborative efforts in due time.”

Photos from the event can be viewed on Facebook at Garden Grove City Hall.

State of the City Videos: