GGPD Helping to Keep Roadways Safe Over the Holidays

The Christmas and New Year’s holidays are ways to spend time with family and friends ringing in another year, but also a time when people can make poor choices that put themselves and others at risk on the road.

To help spread the message about the dangers of drunk and drugged driving, Garden Grove Police Department is partnering with the California Office of Traffic Safety (OTS) and National Highway Traffic Safety Administration (NHTSA) to get impaired drivers off roads.

During the high-visibility enforcement campaign, Drive Sober or Get Pulled Over, which runs from Friday, December 14, 2018 through Tuesday, January 1, 2019, the Garden Grove Police Department will have more officers on the road conducting saturation patrols and looking for drivers suspected of driving under the influence of alcohol and/or drugs.

In addition, the Garden Grove Police Department will hold a DUI checkpoint on Saturday, December 22, 2018, at 9:00 p.m., at an undisclosed location within the city limits.

The December 2018 enforcement; December 22 checkpoint; and winter public education campaign is dedicated to the memory of Costa Mesa Fire Captain Mike Kreza, who was killed by an intoxicated driver while riding his bicycle off-duty on Monday, November 5, 2018.

“Whether you are home with family or at the bar, it is important that you find a sober ride home after drinking,” said Police Chief Todd Elgin. “As an adult, it is up to you to make adult decisions and drive sober or use a ride share service. There are no excuses for driving impaired.”

“Drunk driving continues to be a huge problem in this country, and more recently, marijuana and drug-impaired driving,” said Elgin. “People are out and about shopping for the holidays and going to or hosting parties, so it is important that everyone acts responsibly behind the wheel.”

During the 2017 Christmas and New Year’s holiday periods, 25 people were killed and 643 injured on California roads, according to data from the California Highway Patrol (CHP) Statewide Integrated Traffic Records System (SWITRS).

Funding for impaired driving enforcement operations are provided by a grant from OTS, through the NHTSA. 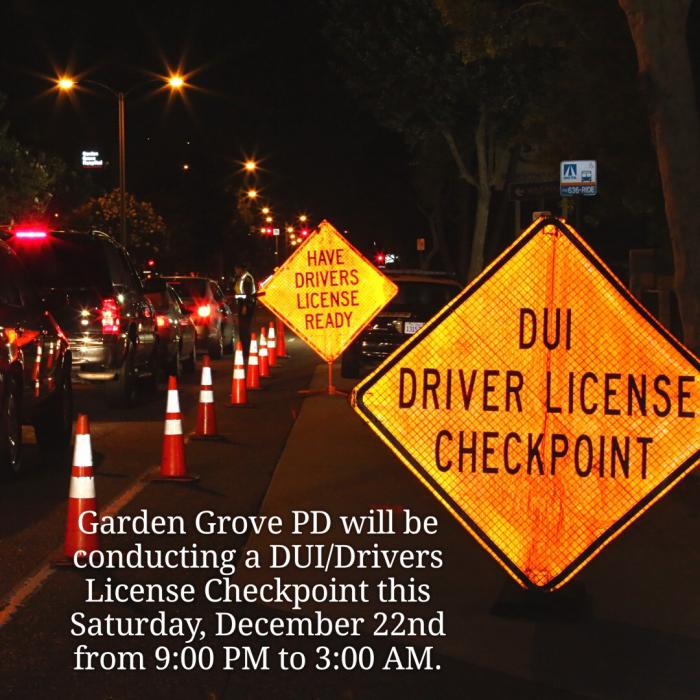