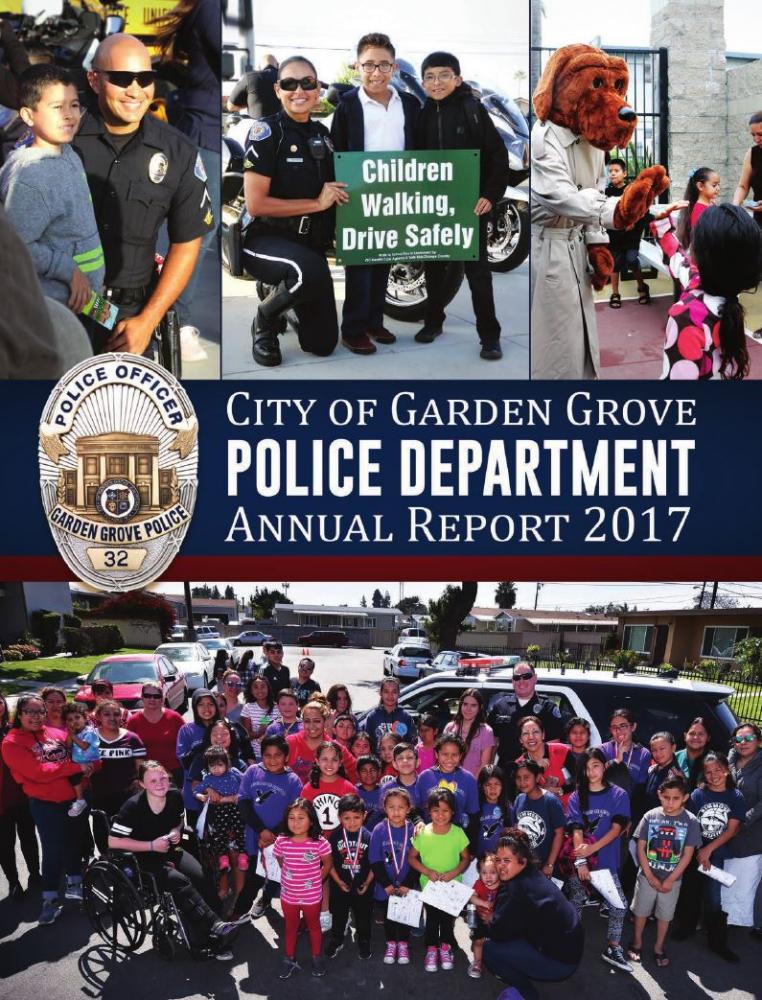 On behalf of the dedicated members of the Garden Grove Police Department, it is my privilege to present to you our 2017 Annual Report. This report is a snapshot of some of the
great work done in 2017, but it also provides insight into some of the challenges we’ll continue to face in the coming years.

Higher crime rates, sharp increases in the homeless population and an increase in calls for service have strained the department’s already limited resources and pushed the limits of our staff. Recent voter-approved legislation -the Safe Neighborhoods and Schools Act (Prop. 47) and the Public Safety and Rehabilitation Act of 2016 (Prop. 57), along with the Public Safety Realignment Act of 2011 (AB109) continues to tie the hands of law enforcement. In 2017, major crimes were up 6% from 2016, homeless-related calls for service were up 33%, and overall calls for service were up 10%. Department personnel handled more than 74,000 calls for service in 2017, and made more than 7,000 arrests, up 18% from 2016.

State budget cuts and increased crime rates have put this department in a precarious position. The department is authorized for 167 sworn officers but, due to various factors, we averaged only 142 sworn officers working in 2017. We are working with city leaders to find new revenue sources that would allow us to put more police officers on the street to handle the increase in crime and call volume.

On a different note, remodeling projects in the Records and Communications divisions, as well as the front lobby, were completed in 2017. The police station was built in 1972, and although some improvements have been made over the years, a major remodel was necessary to improve the work environment and overall safety. More information about these projects can be found in the Records and Communications write-ups.

Policing our city is everyone’s responsibility so we urge the citizens of Garden Grove to stay vigilant, because you are the eyes and ears of the community. Be proactive about your own personal safety, look out for your neighbor, and be aware of what’s going on in your community. Informed, alert citizens play a critical role in keeping our community safe, so “If You See Something, Say Something.”